The Ontology for Avida (OntoAvida) project aims to develop an integrated vocabulary for the description of Avida, the most widely used computational approach for performing experimental evolution. The lack of a clearly defined vocabulary makes biologists feel reluctant to embrace the field of digital evolution. This unique ontology has the potential to change this picture overnight. In addition, OntoAvida will allow researchers to make inference (e.g., on phenotypic plasticity) based on certain rules and constraints, facilitate the reproducibility of the in silico evolution experiments reported in the scientific literature, and trace the provenance of the data stored in AvidaDB—a RDF database on digital organisms and their genomes.

Digital evolution is a form of evolutionary computation in which self-replicating computer programs—digital organisms—evolve within a user-defined computational environment. Avida satisfies three essential requirements for evolution to occur: replication, heritable variation, and differential fitness. The latter arises through competition for the limited resources of memory space and central processing unit, CPU time. A digital organism in Avida consists of a sequence of instructions—its genome or genotype—and a virtual CPU, which executes these instructions. Some of these instructions are involved in copying an organism's genome, which is the only way the organism can pass its genetic material to future generations. To reproduce, a digital organism must copy this genome instruction by instruction into a new region of memory through a process that may lead to errors, i.e., mutations. A mutation occurs when an instruction is copied incorrectly, and is instead replaced in the offspring genome by an instruction chosen at random (with a uniform distribution) from a set of possible instructions. Some instructions are required for viability—replication—whereas others are required to complete computational operations (such as addition, multiplications, and bit-shifts), and are executed on binary numbers taken from the environment through input-output instructions harbored in the digital organism's genome. The output of processing these numbers might be the result of a specific Boolean logic operation (digital analogs of functional traits). The identity of the logic operations that can be computed by a digital organism defines it phenotype. An organism can be rewarded for computing Boolean logic operations with virtual CPU-cycles, which speeds up the execution of the instructions harbored in its genome. This creates an additional selective pressure (besides reducing the number of instructions required for replication) which favours those organisms in an evolving population where mutations have produced sequences of instructions in their genomes that encode phenotypes determined by the Boolean logic operations they compute. Organisms that are more successful—those that replicate faster—are more likely to spread through a population.

Many scientific publications have used Avida as digital evolution platform to shed light on fundamental questions in ecology and evolutionary biology, such as the evolution of genome architecture, gene regulatory networks, robustness, evolvability, complexity, phenotypic plasticity, adaptive radiations, ecological interactions, cooperation, and the evolution of sex.

OntoAvida was initially developed by the Computational Biology Lab at the Doñana Biological Station (a research institute of the Spanish National Research Council based at Seville, Spain). Contributors to OntoAvida are expected to include members of the Digital Evolution Laboratory at Michigan State University (USA).

More information can be found at the OBO Foundry 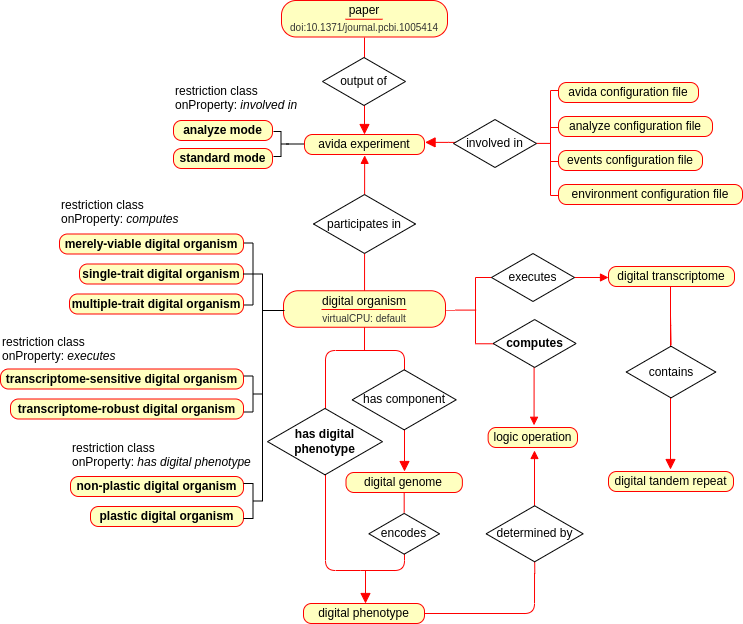